Additional recent developments that may affect your 2014 tax return

The following is a summary of the most important tax developments that have occurred in the past three months that may affect you, your family, your investments, and your livelihood. Please call us for more information about any of these developments and what steps you should implement to take advantage of favorable developments and to minimize the impact of those that are unfavorable.

New tax-advantaged ABLE accounts. A new law allows states to establish tax-exempt “Achieving a Better Life Experience” (ABLE) accounts, which are tax-free accounts that can be used to save for disability-related expenses. They can be created by individuals to support themselves or by families to support their dependents. Assets can be accumulated, invested, grown and distributed free from federal taxes. Contributions to the accounts are made on an after-tax basis (i.e., contributions aren’t deductible), but assets in the account grow tax free and are protected from tax as long as they are used to pay qualified expenses. Withdrawals are tax-free if the money is used for disability-related expenses including: education; housing; transportation; employment support; health, prevention, and wellness costs; assistive technology and personal support services. A nonqualified distribution is subject to income tax and a 10% penalty on the part of the distribution attributable to earnings. Each disabled person is limited to one ABLE account, and total annual contributions by all individuals to any one ABLE account can be made up to the inflation-adjusted gift tax exclusion amount ($14,000 for 2015).

Health care impacts 2014 income tax returns. The IRS has provided details on how health care reform under the Affordable Care Act (ACA) affects the upcoming income tax return filing season. The most important ACA tax provision for individuals and families is the premium tax credit. Under another key provision, individuals without coverage and those who don’t maintain coverage throughout the year must have an exemption or make an individual shared responsibility payment, as separately detailed in final regulations and a notice issued by the IRS in November. The IRS stresses that most people already have qualifying health care coverage and will only need to check a box to indicate that they satisfy the individual shared responsibility provision when they file their tax returns in early 2015. Individuals and families who get coverage through the Health Insurance Marketplace (Marketplace, also known as an exchange) may be eligible for the premium tax credit. Eligible individuals and families can choose to have advance credit payments paid directly to their insurance company to lower what they pay out-of-pocket for their monthly premiums. Early in 2015, individuals who bought health insurance through the Marketplace will receive Form 1095-A, Health Insurance Marketplace Statement, which includes information about their coverage and any premium assistance received. Form 1095-A will help individuals complete their return. Individuals claiming the premium tax credit, including those who received advance payments of the premium tax credit, must file a federal income tax return for the year and attach Form 8962, Premium Tax Credit.

More guidance on toughened IRA rollover rule. A law limits the number of IRA rollovers that can be made in any 1-year period to one. Earlier, the Tax Court held that the limit applies to all of an individual’s IRAs even though the IRS had stated that the limit applies to each separate IRA an individual owns. Shortly after this decision, the IRS announced that it will adopt the more restrictive view for distributions after 2014. Then, in November, the IRS issued more guidance to clarify the start of the new policy. As clarified, an individual receiving an IRA distribution on or after Jan. 1, 2015 cannot roll over any portion of the distribution into an IRA if the individual has received a distribution from any IRA in the preceding 1-year period that was rolled over into an IRA. However, as a transition rule for distributions in 2015, a distribution occurring in 2014 that was rolled over is disregarded for purposes of determining whether a 2015 distribution can be rolled over, provided that the 2015 distribution is from an IRA that neither made nor received the 2014 distribution.

Standard mileage rates up and down for 2015. The optional mileage allowance for owned or leased autos (including vans, pickups or panel trucks) is 57.5¢ per each business mile traveled after 2014. That’s 1.5¢ more than the 56¢ allowance for business mileage during 2014. But the 2015 rate for using a car to get medical care or in connection with a move that qualifies for the moving expense deduction is 23¢ per mile, 0.5¢ less per mile than the 23.5¢ rate for 2014..

Tenant’s death extinguished tax lien on jointly held property. A district court has held that an IRS lien on a taxpayer’s interest in property was extinguished at his death because the property was owned jointly with a right of survivorship and the other joint tenant survived the taxpayer. Thus, there was no interest left to which the lien could continue to attach.

Tax developments involving West African Ebola outbreak. The IRS has designated the Ebola outbreak occurring in the West African countries of Guinea, Liberia, and Sierra Leone as a qualified disaster for purposes of the income tax exclusion for qualified disaster relief payments. The IRS also made clear that employer-sponsored private foundations can provide disaster relief to employee-victims in areas affected by the outbreak without jeopardizing their exempt status. In addition, the IRS announced that employees won’t be taxed when they forgo vacation, sick, or personal leave in exchange for employer contributions of amounts to charitable organizations providing relief to Ebola victims in Guinea, Liberia and Sierra Leone. Employers may deduct the amounts as business expenses. 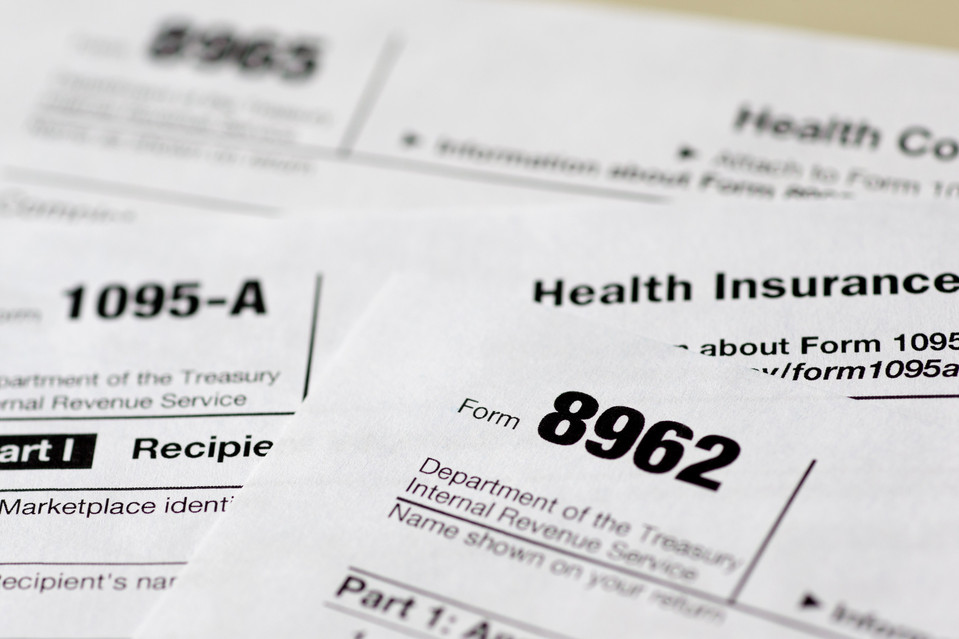 ENLARGE
This year, all taxpayers have to report to the IRS for the first time whether or not they had health insurance the previous year. Associated Press
By
Stephanie Armour And
Louise Radnofsky

The first year of the Affordable Care Act is in the books, and now comes a tricky tax-filing season for millions of Americans.

The law’s requirement that most Americans carry health insurance means all filers must indicate on federal tax forms whether they had coverage last year and got tax credits to help pay for it. Those who didn’t have coverage could face a fine, although reduced staffing at the Internal Revenue Service and certain changes to the law mean the so-called individual mandate is expected to be lightly enforced this year, tax preparers say.

Meanwhile, millions of Americans who got subsidies under the law may find they are getting smaller-than-expected refunds or owe the IRS because credits they received to offset their insurance premiums were too large. As many as half of the roughly 6.8 million Americans who got subsidies may have to refund money to the government, based on one estimate by tax firm H&R Block Inc.

“The ACA is going to result in more confusion for existing clients and many taxpayers may well be very disappointed by getting less money and possibly even owing money,” said Charles McCabe, president of Peoples Income Tax and the Income Tax School, a Richmond, Va., provider of tax preparation and education. “The whole implementation of Obamacare will be frustrating for tax preparers.”

What if you didn’t have health insurance in 2014?

But the season could be a lucrative one for tax firms. Liberty Tax Service, a tax-preparation franchise, began calling hundreds of thousands of customers in November to invite them to a store to get help applying for an exemption to the insurance-coverage requirement. About half of the company’s 4,000 stores opened weeks ahead of their usual start date to provide health-law tax advice.

The IRS also is expecting more calls from consumers at a time when congressional funding for the agency has dropped nearly $1 billion since fiscal 2010, and its workforce has 13,000 fewer full-time employees than it did in 2010. Congressional Republicans opposed to the health law have said limiting the IRS’s budget is one way to slow the law’s implementation, including in last month’s budget agreement for the remainder of fiscal 2015.

IRS Commissioner John Koskinen , in a November speech, said his agency’s reduced funding would hamper its ability “to provide the level of taxpayer services that the public has a right to expect.”

To help avert problems, federal agencies including the IRS and the Centers for Medicare and Medicaid Services in January will reach out to consumers via phone calls, text messages and emails to tell them what to expect during the tax season. IRS officials are urging consumers to file electronically for a quicker return.

The original 2010 health law had more mechanisms to enforce the insurance-coverage requirement. It required employers to supply the agency with the names of about 150 million Americans who got coverage through their job.

But the Obama administration in 2013 delayed that reporting requirement. It also widened the list of reasons a person could avoid paying the penalty if he skipped insurance coverage, exempting certain people whose insurance plans were canceled because of the law.

This year, the IRS said it is entrusting consumers to answer honestly if they had health insurance or need to pay a penalty. While the agency said it won’t reject returns if questions about health coverage aren’t answered, it said consumers who don’t answer affirmatively that they had coverage will be expected to have an exemption or request one, or to calculate the penalty they owe. The fine for not having coverage starts at $95 and ranges up to 1% of household income, which would be added to 2014 tax liability.

Some makers of tax-filing software, including Intuit Inc. ’s TurboTax, say they have set up their systems to reject incomplete forms. But tax preparers say there is little to stop a filer from asserting they have coverage, thereby avoiding any penalty, even if they were uninsured. IRS officials note the tax system for years has been built on voluntary compliance, and the agency said it could use its regular enforcement tools, such as asking for more documentation or auditing. 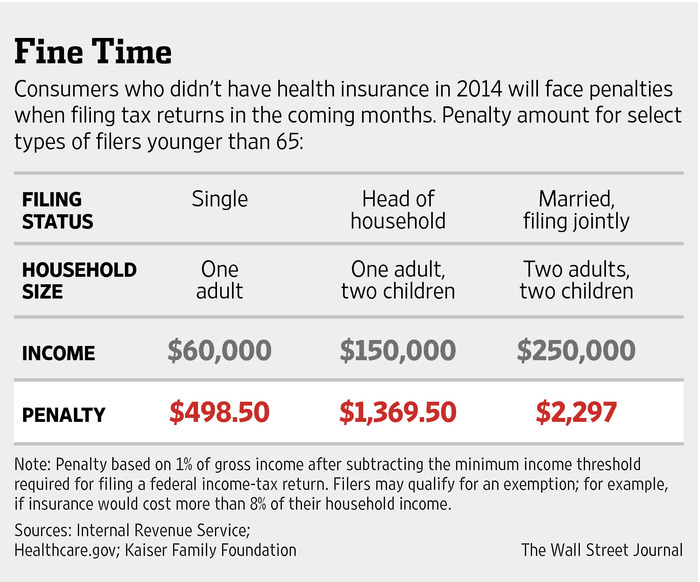 “As always, taxpayers are responsible for the accuracy of the information on the tax returns that they sign,” said Anthony Burke, an IRS spokesman. He added that “the vast majority of filers will have had coverage for the full year and will simply need to check a box to indicate that.”

The IRS also said it would allow taxpayers who have applied for—but not yet received—exemptions from the individual mandate to put “pending” on their forms so they don’t have to delay filing and obtaining their refund.

In addition to determining who has to pay a penalty, the accuracy of tax credits is likely to pose challenges. Because people often incorrectly estimate their future income, many Americans may have gotten subsidies—based on their own projections of 2014 income—that were too generous.

Tax credits for people eligible to use the health law’s exchanges would, on average, be too high by $208 if they were based on the applicants’ most recent tax returns, according to modeling by Vanderbilt University assistant professor John Graves. The IRS said some filers got subsidies that were too small and will get larger refunds.

When the health law was passed, the amount of money that could be taken back from lower-income people who overestimated their incomes was capped at $250 for a single person and $400 for a household. Those caps were significantly raised in an effort to fund Medicare physician payments in late 2010, to as much as $2,500 for a family at the upper end of the income-eligibility range. They were tweaked again in 2011 as part of a tax change to the health law’s 1099 reporting forms that required more people to reimburse overpayments in full.

Write to Stephanie Armour at stephanie.armour@wsj.com and Louise Radnofsky at louise.radnofsky@wsj.com